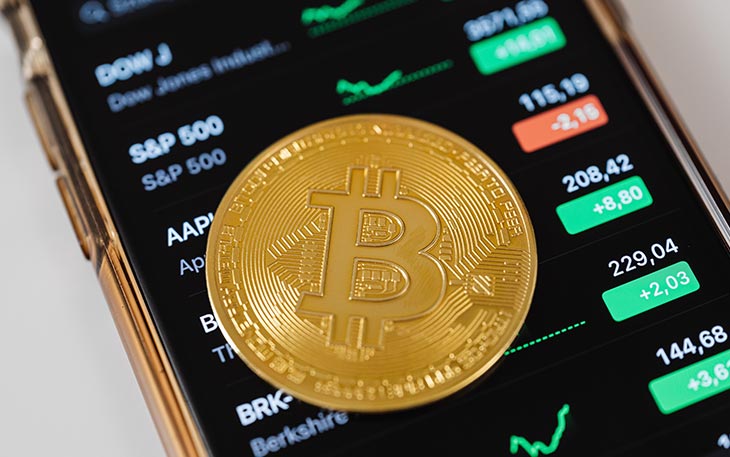 A cryptocurrency is a digital form of currency that can be used to purchase goods and services. The “crypto” in “cryptocurrency” refers to the various encryption algorithms and cryptographic (coding) techniques that safeguard these entries.[1] Cryptocurrencies use an online ledger with strong cryptography to process secure online transactions. Many companies issue their own currencies, oftentimes referred to as “tokens,” which can be traded specifically for a good or service that the issuing company offers. Of course to begin, you will need to exchange real currency (aka money) for the cryptocurrency. A simple way to think of cryptocurrency is as an arcade token: you pay a certain amount of money to receive a certain number of tokens. These tokens can be used for any game in the arcade but have no monetary value outside of the issuing arcade. Cryptocurrencies operate using blockchain, a decentralized technology that manages and records cryptocurrency transactions. Blockchain technology is important because it makes it difficult, often even impossible, to change, hack, or cheat the system. It ensures fair practices to both issuers and consumers and offers a sense of security.

Where and How it All Began

Before the 21st century cryptocurrency uproar, there were several attempts to establish similar technologies that just did not seem to gain rigor. The earliest platforms emerged from the hands of American cryptographer David Chaum. In 1983, Chaum developed a cryptographic system called eCash. Twelve years later he developed another system called DigiCash, which unfortunately did not make it past the 1990s. Although the attempt at cryptocurrency creation originated with Chuam, the first time the idea or term “cryptocurrency” was coined was in 1998 by computer engineer Wei Dai. Later, Paypal and competitors emerged and took a hybrid approach where the platforms handled digital transactions in existing currencies. Though these companies aren’t cryptocurrencies per se, they still play major roles in online and international commerce between businesses and even between individuals on a day-to-day basis as well.

Despite many attempts, true success and popularity did not come until almost a decade into the 21st century with the creation of Bitcoin. The ever-so-popular Bitcoin was the first blockchain-based cryptocurrency to emerge in the market and remains incredibly valuable. The concept fully began with the release of a white paper that explained the foundations of blockchain and Bitcoin.[2] The author of the paper is “Satoshi Nakamoto,” which many presume is a pseudonym for either a single person or a group of people.[3] Bitcoin was created in January of 2009, and the identity of its creator(s) still remains a mystery. As of March of 2021, it was recorded that there were over 18.6 million bitcoins in circulation, with a total market cap of around $927 billion.[4] Today in 2021, there are thousands of different cryptocurrencies, all with various functions. Some of these currencies are clones of Bitcoin, while others are new currencies started from scratch. Among the cryptocurrencies currently circulating are Litecoin, Peercoin, Namecoin, Ethereum, Cardano, and EOS. The aggregate value of all cryptocurrencies in existence around the world equals around $1.5 trillion, with Bitcoin representing more than 60% of this total value.[5]

Is it Worth it?

Cryptocurrency carries advantages. They offer the promise of making it less complicated to transfer funds directly between two parties without the need for a third party, such as a credit card company or a bank. Instead, transfers are secured through blockchain technology including the use of public and private keys and different forms of incentive systems. Another benefit is that the transfer of funds is completed with minimal processing fees, which allows users to avoid the hefty fees often charged for wire transfers by banks and other financial institutions.

Another draw to cryptocurrency is user autonomy. Digital currency allows users more autonomy over their own money and allows them to control how they spend their money without dealing with an intermediary third party authority, such as a bank or the government. Some users also value the discretion:  Purchases using cryptocurrencies are discreet and unless a user voluntarily publishes his or her transactions, purchases will never be associated with their personal identity. As a result, similar to cash purchases, one’s purchases cannot be easily traced back to the user.

Because cryptocurrencies are digital currencies, an obvious advantage to the technology is accessibility: users are able to send and receive payments only digitally via phone, laptop, or another electronic, internet-enabled device, and this eliminates the need for access to traditional banking systems like credit cards or physical banks. Users and purchasers never have to travel to a bank or store to purchase a product, and all that is needed to complete a transaction is internet access. Since most individuals have access to the internet and own some kind of mobile device, cryptocurrency is highly favorable since it can be accessed and utilized at almost any time from any place where there is internet.

Like any good technology, cryptocurrencies also have disadvantages. Cryptocurrency transactions are quite anonymous in their nature, therefore making them susceptible to illegal activities such as fraud, money laundering, and tax evasion. Cryptocurrency blockchains themselves are highly secure, but other aspects of the cryptocurrency system like wallets and exchanges do not enjoy complete immunity from the potential threat of hacking and theft. Another problem with currencies is price volatility, which is tied to a lack of inherent value. This is an important concern, but it can be overcome by linking the cryptocurrency value directly to tangible and intangible assets.

Cryptocurrency Use Among Companies

Use of and investment in cryptocurrencies is continually increasing and this technology is beginning to be utilized by companies worldwide. Two companies that have developed or are in the process of developing their own cryptocurrency are Kodak, the photography company, which created “KodakCoin,” and social media company Facebook, which created “Libra.”

Some accommodation companies are allowing the use of virtual currencies as a payment method, including hotel chains, airlines, and tourist parks.[7] Casual Hotels, a Spanish hotel chain, allows the use of cryptocurrency payment at their Casual del Mar Hotel in Malaga. Although this is the only one of their hotels that currently allow cryptocurrency payments, the intention of the chain’s owners is to implement this technology into all the hotels managed by the brand. US-based airline Surf Air already allows consumers to carry out some actions with cryptocurrencies, like cancelling flights or paying a monthly fee when the traveler flight has profit. Finally, the National Tourist Office of Germany has expressed an intention through official statements to use cryptocurrencies in transactions.

Investing in Cryptocurrency: Where to Start

You can’t simply walk into your local bank or a brokerage firm to buy cryptocurrency: Remember, the beauty of it all is that it is 100% digital. Because it is a technology that remains somewhat not well understood and is unregulated, financial institutions typically don’t deal with it. Therefore, if you want to invest in and purchase cryptocurrency, you will have to be in control.

How much to dish out

Next, and probably most important:  You must choose your cryptocurrency. There are hundreds of potential options, making the decision a difficult one. As of May 2021, the largest and most popular cryptocurrency that is drawing the most money from investors is Bitcoin.[9] There are many reasons for Bitcoin’s lead in the cryptocurrency game, but this doesn’t mean that this platform is your only option considering the large number of other cryptos. Investors have put money into other cryptocurrencies like Ethereum, Zcash, Dash, and Ripple, but again, Bitcoin’s success and the fact that the company is almost synonymous with “cryptocurrency,” pushes Bitcoin to the top of the lists of many.

Safe and sound: where to store your currency

Can my Crypto Stock Value Drop?

The short answer: yes. Like any market, the value of your cryptocurrency stock can and will fluctuate. Factors that impact the price and value of cryptocurrency include regulations, current affairs, speculation, and hacking.  As financier J.P. Morgan observed, “The market will fluctuate.” The important thing to consider is how a price drop and a drop in your cryptocurrency stock value affects your individual overall investment plan. Before you bought the stock, you should have had some expectations of what you were hoping to get out of your investment. As long as the stock continues to meet your expectations, there is no need to make any changes, even if the price has dropped. Before you decide to buy, sell or hold your cryptocurrency stock, consider why the value may be dropping, especially if economy is in good shape and every other company in the industry sector seems to be doing well. If you discover something has changed for the worse and that cryptocurrency is taking a hard hit and is phasing its way out, you will need to decide at what point you need to sell out of your position-even if this means taking a loss on your investment.

With digital currency gaining traction, we can expect to see legal issues and claims coming into the light as disputes and difficult questions arise. Common questions of law and fact that arise relating to cryptocurrency the legal rights and obligations of private and corporate individuals, contractual issues, fraud, cryptocurrency theft, and insuring cryptocurrency. Questions of jurisdiction also arise-thus, with the uncertain regulatory status and shifting designation of crypto changing based on jurisdiction, businesses and individuals wanting to take advantage of this technology or diversify their investments are likely to face a number of legal challenges.

The Predicted Bright Future of Cryptocurrency

Based on current statistics and trends, it appears that cryptocurrency is on track to continue to be widely adopted across the world. This technology has gained the attention and support of major investment banks, such as JP Morgan and Goldman Sachs, both which are perceived as highl reputable and trusted by the public eye. Mathew McDermott, the London-based Goldman Sachs managing director of its digital asset team, told Financial News during an interview that “we’ve crossed a line” into an era of adoption in which cryptocurrencies are a widely accepted store of value and hedge.[10] Given the current views and predictions, especially considering the fact that we are living in a highly digital society, it looks like cryptocurrency is here to stay for a while.

Atara Twersky, is of counsel at AF&T.  Atara is also the bestselling author of the children’s book series, Curlee Girlee, inspired by her own young  curly haired daughter and written for all curly girls in an effort to ensure they love themselves and their hair exactly as it is, understanding that their hair is part of a greater legacy they share with those who came before them.  You can find out more about Atara here. Listen to other podcast episodes Pension Trends Plus with Atara Twersky here  or wherever you listen to your favorite podcasts!

[8] Investor Junkie. “How to Invest in Cryptocurrency.” https://investorjunkie.com/alternative-investments/investing-in-cryptocurrency/. Accessed May 20, 2021.